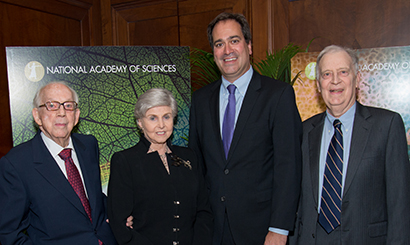 Northwestern University scientist Chad A. Mirkin, one of the world’s leaders in nanotechnology research and its application, has been awarded the inaugural $400,000 Raymond and Beverly Sackler Prize in Convergence Research from the National Academy of Sciences (NAS).

This year’s prize is being awarded for convergence research that benefits human health.

A researcher whose work cuts across disciplines, Mirkin is being recognized “for impressively integrating chemistry, materials science, molecular biology and biomedicine in the development of spherical nucleic acids that are widely used in the rapid and automated diagnosis of infectious diseases and many other human diseases — including cancers and cardiac disease — and in the detection of drug-resistant bacteria.”

These nanostructures, called SNAs, are able to access and interact in unique ways with biological systems and structures, including cancer cells and tumors.

Mirkin will receive the prestigious award Oct. 13 during a ceremony at the NAS building in Washington, D.C.

“I am absolutely delighted to be recognized by the academy with this inaugural award,” Mirkin said. “It is a remarkable tribute to the many students and postdoctoral associates who have contributed to my group’s research over the last two decades.”

Mirkin is the George B. Rathmann Professor of Chemistry in the Weinberg College of Arts and Sciences and founding director of Northwestern’s International Institute for Nanotechnology.

The annual prize was established through a generous gift from Raymond and Beverly Sackler and their foundation. It recognizes significant advances in convergence research — the integration of two or more of the following disciplines: mathematics, physics, chemistry, biomedicine, biology, astronomy, earth sciences, engineering and computational science — and achievements possible only through such integration.

“By successfully combining the power of many scientific disciplines, Chad Mirkin created an entirely new kind of nucleic acid that is fueling critical advances in the diagnosis and treatment of devastating illnesses,” said Ralph J. Cicerone, president of the National Academy of Sciences. “We are pleased to recognize his significant achievements in convergence research with this prize.”

One-third of the prize money will go to support the further development of Mirkin’s SNAs for the treatment of cancers.

SNAs are nanoscale structures comprised of round nanoparticles densely covered with DNA or nucleic acids — the building blocks of living organisms. Like rays emitting from the sun, the DNA strands dangle from a common center; the resulting 3-D structure gives SNAs chemical and physical properties that are radically different from DNA configured in other shapes.

For example, SNAs can cross the blood-brain barrier, penetrate cells and circumvent the human immune system. SNAs are showing promise as highly efficacious, targeted and personalized solutions for the prediction of disease prognosis, as well as for early diagnosis and treatment of patients struggling with advanced cancers.

“Chad’s impact in multiple fields has been extraordinary,” said Dr. Steven T. Rosen, provost and chief scientific officer at the City of Hope, a leading research and treatment center for cancer, diabetes and other life-threatening diseases. “He is both a gifted investigator and true visionary.”

Rosen, former director of the Robert H. Lurie Comprehensive Cancer Center of Northwestern University, is a longtime colleague and collaborator of Mirkin’s.

Mirkin is a member of the Lurie Cancer Center as well as co-director of the new Northwestern University Center for Cancer Nanotechnology Excellence. He also is a professor of medicine, chemical and biological engineering, biomedical engineering and materials science at Northwestern.

One of the most-cited researchers in the world, Mirkin is the author of 610 manuscripts and more than 960 patents and applications. He is a member of President Obama’s Council of Advisors on Science and Technology.

Mirkin’s research at Northwestern has resulted in several startup companies that are working to bring his inventions from lab to market. They include Nanosphere, Inc., founded with the late Robert Letsinger, professor emeritus of chemistry at Northwestern; AuraSense Therapeutics; and Exicure.

The International Institute for Nanotechnology is an umbrella organization that represents and unites more than $800 million in nanotechnology research, education and supporting infrastructure.