Northwestern Engineering researchers have developed a new framework using machine learning that improves the accuracy of interatomic potentials — the guiding rules describing how atoms interact — in new materials design. The findings could lead to more accurate predictions of how new materials transfer heat, deform, and fail at the atomic scale.

Designing new nanomaterials is an important aspect of developing next-generation devices used in electronics, sensors, energy harvesting and storage, optical detectors, and structural materials. To design these materials, researchers create interatomic potentials through atomistic modeling, a computational approach that predicts how these materials behave by accounting for their properties at the smallest level. The process to establish materials’ interatomic potential — called parameterization — has required significant chemical and physical intuition, leading to less accurate prediction of new materials design. 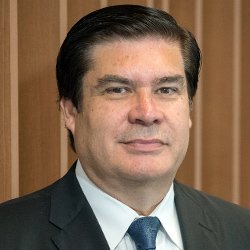 “The computational algorithms we developed provide analysts with a methodology to assess and avoid traditional shortcomings,” said Horacio Espinosa, James N. and Nancy J. Farley Professor in Manufacturing and Entrepreneurship and professor of mechanical engineering and (by courtesy) biomedical engineering and civil and environmental engineering at the McCormick School of Engineering, and an affiliated faculty member of the International Institute for Nanotechnology, who led the research. “They also provide the means to tailor the parameterization to applications of interest.”

“We defined a sequence of steps to reach an iterative learning approach given specific optimization objectives,” said Espinosa, who directs the TAM program. “Our statistical approach enables users to realize conflicting optimization goals that are important in setting limits of applicability and transferability to the parametrized potentials.” These relations can reveal underlying physics behind some phenomena that seem to be irrelevant to each other.

The team identified a positive correlation between the accuracy of interatomic potential and the complexity and number of the stated parameters — a phenomenon believed to be true in the field, but previously unproven using quantitative methods. This level of complexity must be met by a commensurate amount of training data. Failure to do so, especially data carrying critical information, leads to reduced accuracy.

The researchers found, for example, that to improve the fidelity of interatomic potentials, non-equilibrium properties and force-matching data are required.

“This included a better description of large deformation pathways and failure in materials,” Nguyen said.

“While these are not conventional properties that people target during parametrization, they are critical in understanding the reliability and functionality of materials and devices,” Zhang said.

The new approach also helps remove the barrier of user experience to enter this research field. “Through this work, we hope to make a step forward by making the simulation techniques more accurately reflect the property of materials. That knowledge can be expanded upon and eventually impact the design of devices and technology we all use,” Zhang said.

Next, the researchers will use their models to expand their investigation to study fracture and deformation in 2D materials, as well as the role of defect engineering in toughness enhancements. They are also developing in situ electron microscopy experiments that will reveal atomistic failure modes, providing a way to assess the predictive capabilities of the parameterized potentials.

The research was supported by the National Science Foundation (award number CMMI 1953806). Computational resources were provided by the Center of Nanoscale Materials at Argonne National Laboratory and the Quest High Performance Computing Cluster at Northwestern University. Use of the Center for Nanoscale Materials, an Office of Science user facility, was supported by Office of Basic Energy Sciences within the US Department of Energy’s Office of Science (contract number DE-AC02-06CH11357).