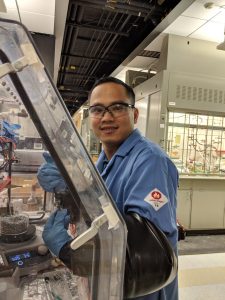 Where are you from originally, and where did you do your undergraduate degree?

I’m from Vietnam; I came to the US in 2009. I did my undergraduate degree at the Vietnam National University in Ho Chi Minh City, and I went to grad school in Texas, at UT Austin.

It goes back to secondary school, when I took two introductory chemistry classes in grade eight and grade nine. I took the classes and I was really impressed with chemistry. And I looked around and I saw that everything around us was chemistry. I grew up on a farm, so I just looked around—okay, water, soy, pesticides, and even plastic, the rice we eat, everything relates to chemistry. So at that time I knew in that way, this is the subject of my life, I will study it.

And when did you begin to focus on nanotechnology?

What is the focus of your research now?

Right now, I’m making mechanically interlocked molecules, and particularly catenanes, molecules that have two or more rings connected by a mechanical bond. And the type of molecule I’m working on is a special catenane that contains ring components that repel each other because the rings contain a lot of positive charges. And as you know, like charges don’t like each other, so they tend to repel. But by using radical chemistry, we’ve been able to bring the repulsive rings together into a really compact space. And we made compounds not only with a high number of positive charges but also a high density of charges in a nanoscale-sized space.

What are the potential applications for this dense network of positively-charged interlocking molecules?

There are a lot of things we can study and explore, and a lot of potential applications. Currently, I’m making a series of molecules that are highly charged and densely packed. And in a paper in Chem, we have three rings together and five rings together, and the three-ring one has the highest positively charged density. And the five-ring one reached the record number of charges within a molecule, up to 24 charges—so that’s a lot!

So now that we’ve successfully made these molecules, I would say the application is in three different areas. The first one is molecular switches. We not only make the high-charged molecules, but these molecules also have switching processes, both redox and topological, which means the exchange of the position between the rings; when we put an electron into the system, the rings switch to a different position. And for the three catenanes, we see the consecutive, radical stacking of molecules, which switches to turn the electron conduction on and off. So we can use that in memory devices, for example.

And finally, we’ve been trying to develop this into molecular machines. So right now, it accepts the redox switch and will move the ring. But it can move either way, clockwise or counter-clockwise. And we have tried to design and make a system that can turn the direction of the rings so that we can make the motor unidirectional, so we just go in one direction.

How does what you’re working on now differ from when you started your career in chemistry?

In grad school, I worked at the macromolecular level, meaning I was working with polymers. So now I’m moving down to the molecular level, and I have a lot of fun with it. So if you say for nanotechnology we have bottom-up or top-down, I would say, OK, I’m going from polymers down to small molecules.

Was that a challenging transition?

For sure there are some differences when you change labs, and also the field of chemistry. At the beginning, I needed to learn about how to make and synthesize a molecule. It was all this work, and it took time to build my skill set in the lab. And I also learned from all of the lab members; so I talked to different people to ask for their advice about a design and how it was going to work for the successful synthesis of the molecules.

But I’ve been here for almost two years now, and it’s really time to move on (laughing). Now I’m almost one of the most senior group members.

I love research, and I’d like to have an independent lab, so I’m preparing application packages for faculty jobs.

What do you like to do outside of the lab?

Outside of the lab, I like tennis and kayaking. I really love the Northwestern area, it’s really beautiful. I’ve been to several campuses at top universities, and I really feel like Northwestern has one of the most beautiful campuses.

And finally, what have been some of the best things about your time in the Stoddart group?

I’ve learned a lot about molecular design to make interlocked molecules. And I’ve had a chance to collaborate with many, many people. The Stoddart group is possibly one of the most diverse groups at Northwestern, because we have about 15 nationalities represented. So when people from 15 different countries come to one place, we have different backgrounds in research and culture, and you can always learn something from them. I’ve learned from people within the group and outside the group as well.

And of course, I’ve learned a lot from Professor Stoddart. I feel like the lab is set up for academic training for future faculties, because we get exposed and involved with every process, from paper writing to corrections and submitting things. In my previous lab, the PI submitted manuscripts, so we just wrote the manuscript and then gave it to him and he corrected it. Here, we’re involved with everything, so we know not only how to get the manuscript done but also the process of submission, the reviewing process, et cetera, and it really helps.