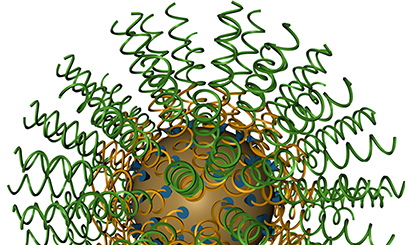 A new high-tech but simple ointment applied to the skin may one day help diabetic patients heal stubborn and painful ulcers on their feet, Northwestern University researchers report.

Scientist and dermatologist Amy S. Paller and chemist Chad A. Mirkin are the first to develop a topical gene regulation technology that speeds the healing of ulcers in diabetic animals. They combined spherical nucleic acids (SNAs, which are nanoscale globular forms of RNA) with a common commercial moisturizer to create a way to topically knock down a gene known to interfere with wound healing.

Type 2 diabetes and its enormous associated costs are on the rise in the United States. More than one-fifth of the 27 million type 2 diabetics in the country have chronic, non-healing skin wounds, and many undergo amputation. The Northwestern discovery offers a possible solution to this serious problem.

“Finding a new way to effectively heal these resistant diabetic wounds is very exciting,” said Dr. Paller, director of Northwestern’s Skin Disease Research Center. “But, in addition, this study further proved that SNAs — in nothing but common moisturizer — can penetrate the skin barrier, a challenge that other therapies have been unable to conquer.”

In earlier work, Paller’s lab had discovered that depleting an enzyme called GM3 synthase made cells particularly sensitive to growth factors and led to normal wound healing despite diabetic conditions. She teamed up with Mirkin, who designed SNAs targeting the gene that produces this troublesome enzyme.

The SNAs were put in the moisturizer Aquaphor and simply applied to the edges of the wounds in diet-induced diabetic mice. The research team noted improved healing in the mice treated with SNAs as compared to the control groups after only four days. The wounds in the treated animals were healed by 12 days; the control group’s wounds took 18 days to heal — 50 percent longer. Blood circulation at the wound site in the treated animals also improved.

“This work illustrates the scope and potential impact of the SNA platform for treating conditions of the skin with a known genetic basis,” said Mirkin, who invented SNAs at Northwestern in 1996. “It is the only known nucleic acid platform for treating such ailments and constitutes a new pipeline of therapeutics to address a broad swath of debilitating health conditions.”

Mirkin and Paller are co-senior authors of the study. The findings are published this week by the Proceedings of the National Academy of Sciences (PNAS).

Paller is the Walter J. Hamlin Professor and chair of dermatology and professor of pediatrics at Northwestern University Feinberg School of Medicine.

Mirkin is the George B. Rathmann Professor of Chemistry in the Weinberg College of Arts and Sciences and professor of medicine, chemical and biological engineering, biomedical engineering and materials science and engineering. He also is the director of Northwestern’s International Institute for Nanotechnology.

The study illustrates the versatility of SNAs, which are nontoxic to humans and can be used, in principle, for any known genetic target. The findings also underscore the critical role of GM3 synthase in diabetic wound healing.

Each SNA is a benign nanoparticle core made of gold, only 13 nanometers in diameter, covered densely with 40 duplex RNA strands. The sequence of the strands is designed to knock down the GM3 synthase gene.

The spherical structure of the SNAs is the ideal architecture for delivering nucleic acids into cells for gene regulation, Mirkin said. They naturally enter cells by engaging scavenger receptors that are not recognized by linear nucleic acids.

In one experiment, the researchers put the same amount of RNA strands with the same genetic sequence into the Aquaphor but in linear, not spherical, form. The treatment did nothing; GM3 synthase was not reduced, and the ulcer healing was as slow as in the control mice treated just with the moisturizer or with a scrambled form of the SNA.

“The spherical configuration really makes a difference,” Mirkin said. “It is a very interesting observation with significant medical ramifications. By using nanotechnology and chemistry to restructure perhaps the most important molecule ever discovered by scientists, we go from a structure that cannot cross the natural barriers within the skin to one that freely traverses them.”

The research team also has an eye on using the SNA-rich ointment to prevent — not just treat — diabetic ulcers and to reduce the abnormal sensations frequently felt in diabetics’ feet.

“We think it also might be possible to prevent these ulcers, not just heal them, by rubbing the ointment on the bottom of the foot,” Paller said. “Our team is looking at this now.”

In addition to Mirkin and Paller, other authors of the paper are Pratik S. Randeria, Mark A. Seeger, Xiao-Qi Wang, Heather Wilson and Desmond Shipp, all of Northwestern.