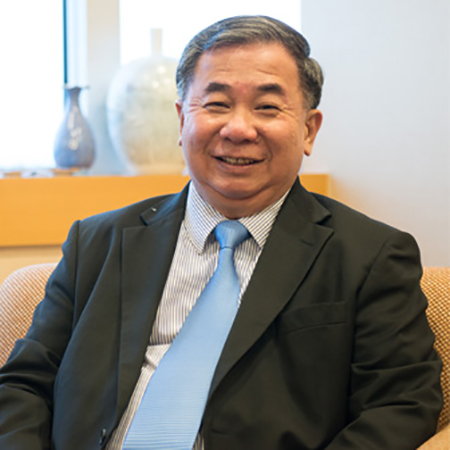 Professor Freddy Boey is Provost at Nanyang Technological University (NTU). He was also previously the Chair of NTU’s School of Materials Science and Engineering from 2005 to 2010, during which time he built the school into one of the world’s largest and research intensive Materials Science & Engineering department.

Professor Boey’s key research contribution has been in the use of functional biomaterials for medical devices. A keen inventor, Professor Boey has founded several companies with his many patents to commercialize his cardiovascular, ocular and surgical implants. Some of his inventions, like the surgical tissue retractor, has been sold in the US, Europe, Japan, Middle East and India and the customizable hernia mesh, most recently approved for sale by the FDA.

He has published 344 top journal papers resulting in 7436 citations and H-index of 44. He has won more than S$36 million in research grants in the last three years, including a prestigious S$10 million individual National Research Foundation (NRF) Competitive Research Programme grant for his work on fully biodegradable cardiovascular implants, a S$20 million NRF Technion–Singapore grant for his research in nanomedicine for cardiovascular diseases and a S$1.25 million grant from the NRF Translational Flagship Project for his ocular devices research.

He has received the prestigious Faculty of Medicine Fellowship by Imperial College London in 2013 for his exceptional achievements in medical technology and his outstanding contributions to the development of the Lee Kong Chian School of Medicine. He was awarded Singapore’s Public Administration Medal (Silver) by the Government of Singapore in 2010. In November 2011, he received the Distinguished Alumni of the Year Award from Monash University at its 50th anniversary celebrations to recognize his achievements as a teacher, researcher and innovator, including his exceptional contributions to nanomedicine, as well as his volunteer work since his student days. In December 2011, he was also awarded, honoris causis, Doctor of Technology, by the Loughborough University in UK. He has also been conferred Honorary Professorship by the University of Indonesia and Nanjing Postal and Telecommunication University. He is also a founding Fellow of the Academy of Engineering Singapore and sits as Board Director in IPOS under the Ministry of Law and in the Defence Science Organisation under the Ministry of Defence.