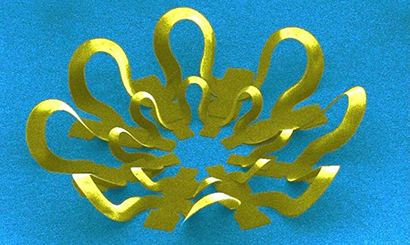 Designed structures go from two dimensions to three with a simple ‘pop!’

EVANSTON, Ill. — Researchers at Northwestern University and the University of Illinois at Urbana-Champaign have developed a simple new fabrication technique to create beautiful and complex 3-D micro- and nanostructures with many advantages over 3-D printing.

The technique mimics the action of a children’s pop-up book — starting as a flat two-dimensional structure and popping up into a more complex 3-D structure. Using a variety of advanced materials, including silicon, the researchers produced more than 40 different geometric designs, including shapes resembling a peacock, flower, starburst, table, basket, tent and starfish.

“In just one shot you get your structure,” said Northwestern’s Yonggang Huang, one of three co-corresponding authors on the study. “We first fabricate a two-dimensional structure on a stretched elastic material. Then we release the tension, and up pops a 3-D structure. The 2-D structure must have some place to go, so it pops up.”

The pop-up assembly technique trumps 3-D printing on many levels and is expected to be useful in building biomedical devices, sensors and electronics.

Details of the technique, which relies on compression buckling, will be published as the cover story Jan. 9 in the journal Science.

The study is a demonstration of a new and innovative approach to creating 3-D structures, Huang said. Determining which designs are needed for specific applications will come in future research.

Huang led the portion of the research focused on theory, design and modeling. He is the Joseph Cummings Professor of Civil and Environmental Engineering and a professor of mechanical engineering at Northwestern’s McCormick School of Engineering and Applied Science.

With 3-D printing, on the other hand, it is difficult to integrate more than one material in a structure; it is almost impossible to print semiconductors or single crystalline metals; and speed is slow.

“The pop-up technique will expand what is possible,” Huang said. “3-D fabrication lets you use the space to gain more function in a structure.”

“We know how to design a 2-D structure so that it pops up into the 3-D structure we desire,” said Yihui Zhang, a co-corresponding author of the study. Zhang, who is a research assistant professor of civil and environmental engineering at Northwestern, came up with the initial idea.

Zhang worked together with the research group of John A. Rogers, the paper’s third co-corresponding author and a Swanlund Chair and professor of materials science and engineering at the University of Illinois, in developing the structural designs of 2-D structures to form various classes of 3-D configurations.

“A key, unique feature of these approaches to 3-D microarchitectures is that they work equally well with a very wide variety of materials, including the highest performance semiconductors, such as device-grade silicon, and fully formed, state-of-the-art planar devices and systems,” said Rogers, a longtime collaborator of Huang’s. “We believe, as a result, that these ideas have relevance to nearly every class of microsystem technology — from electronics to photonics, optoelectronics, microelectromechanical structures and others.”

Rogers, who also is director of the Seitz Materials Research Laboratory, led the group that worked on the experimental and fabrication work of the different structures, as well as the device demonstration. Rogers, Huang and Zhang, together with postdoctoral fellows, led the development of the concepts in the 3-D fabrication approach.

“This is what we call an inverse problem — you know what you want in the end but you don’t know what structure to begin with,” Huang said. “In mechanics, this is what we do, apply theory to determine how to design the initial structure. Fabrication using trial and error is too laborious, but our process is very fast.”

Everything is fabricated in two dimensions. Key to the technique are both strong points of adhesion and weak points of adhesion between the 2-D structure and the elastomer it is placed on. When the stretch is released, compression buckling takes place. The strong adhesion points stay in the plane of the elastomer, while the weak points break away. The intended structure pops up into three dimensions.

Zhang used a mechanics model to predict how strong the adhesion points needed to be for a given design.

The title of the paper is “Assembly of micro/nanomaterials into complex, three-dimensional architectures by compressive buckling.”