Graphene-based devices can be made at a low cost and used to detect allergens and toxins at ports, food processing facilities, and supermarkets

What’s the catch of the day? An inexpensive new biosensor could keep a bad cut of fish from reaching your plate.

Researchers from Northwestern Engineering and Iowa State University have developed a graphene-based electrochemical biosensor capable of detecting histamines (allergens) and toxins in food, with a low manufacturing cost and a much faster response than standard laboratory tests.

The key lies in a unique printing process used to create the biosensors. 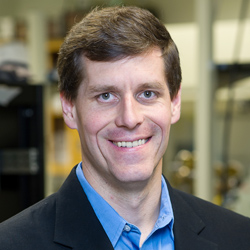 “We developed an aerosol-jet printable graphene ink that enabled us to explore different sensor designs,” said Mark C. Hersam, Walter P. Murphy Professor of Materials Science and Engineering at the McCormick School of Engineering. “Being able to change the electrode patterns on demand allowed rapid prototyping and efficient optimization of the sensor layout.”

The research was published June 10 in the journal 2D Materials.

Carbon nanomaterials like graphene have unique properties, such as high electrical conductivity, surface area, and biocompatibility, that can significantly improve the performance of electrochemical sensors.

Since in-field electrochemical sensors are typically disposable, they require materials that can be made at a low cost, produced at a high throughput, and scaled to meet demand. However, conventional lithographically-patterned graphene devices are expensive, while low-cost alternatives such as screen and inkjet printing do not offer sufficient control over the geometry of the electrodes, resulting in poor electrochemical sensor performance.

As an additive manufacturing method that only deposits material where it is needed, thereby minimizing waste, aerosol-jet-printed sensors are inexpensive, straightforward to make, and portable. These attributes allow their use in places where continuous on-site monitoring of food samples is needed to determine and maintain the quality of products.

The team tested the graphene sensors in both a buffer solution and fish broth to measure their effectiveness at detecting histamines.

The biosensors were capable of detecting histamine levels in the buffer and fish broth over the toxicologically-relevant ranges of 6.25–100 ppm and 6.25–200 ppm, respectively. Histamine levels over 50 ppm in fish, for example, can cause adverse health effects such as severe allergic reactions or scombroid food poisoning.

The biosensors’ response time was 33 minutes, without the need for pre-labelling and pre-treatment of the fish sample – significantly faster than equivalent laboratory tests. The researchers also found that the biosensors were not significantly affected by large proteins commonly found in food samples.

“These biosensors can be used in many settings such as import and export ports, food processing facilities, and supermarkets, where continuous on-site monitoring of food samples is needed,” said Hersam, an affiliated faculty member of Northwestern’s International Institute for Nanotechnology. “On-site testing would eliminate the need to send food samples for laboratory testing, which requires additional steps for handling and increases time and cost for analysis – consequently increasing the risk of foodborne illnesses and food wastage.”

The authors believe that the aerosol-jet printing and functionalization process can be generalized to a wide range of sensing applications including environmental toxins, wearable health monitoring, and health diagnostics.

The study, “Aerosol-jet-printed Graphene Electrochemical Histamine Sensors for Food Safety Monitoring,” was supported by the National Science Foundation Air Force Research Laboratory, and the US Department of Commerce’s National Institute of Standards and Technology.