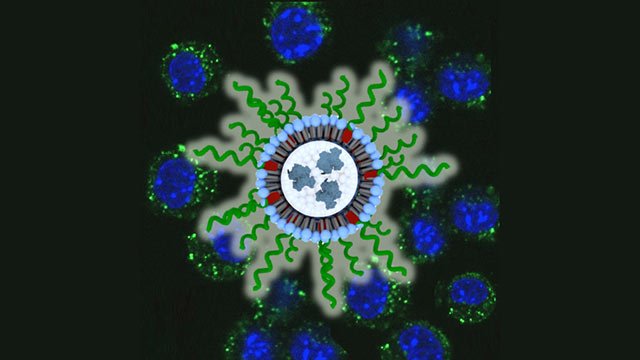 A new immunotherapy developed by researchers at Northwestern University dramatically extends the survival time of mice with triple negative breast cancer, one of the most aggressive and difficult-to-treat forms of breast cancer.

In a new study, mice treated with the therapy, which comprises two immunity-boosting drugs housed inside a nanoparticle, experienced complete tumor remission for at least 100 days. All untreated mice died by day 30. None of the treated mice experienced adverse side effects or autoimmune responses.

The nanoparticle, called a spherical nucleic acid (SNA), is a globular form of DNA that can easily enter and stimulate immune cells. Northwestern’s Chad A. Mirkin, who led the study and invented SNAs, credits the nanoparticle’s shape and structure for the immunotherapy’s success.

“We have demonstrated that the overall structural presentation of a cancer vaccine or immunotherapeutic — not simply the active chemical components — can dramatically impact its potency,” Mirkin said. “This finding is opening doors in an emerging field we call ‘rational vaccinology’ and could lead to treatments for many different types of cancer.”

The research will be published online this week in the Proceedings of the National Academy of Sciences.

Typical immunotherapies consist of a molecule or molecules from tumor cells (called antigens) paired with a molecule (called an adjuvant) that stimulates the immune system. More advanced forms consist of a cocktail of antigen molecules taken from a patient’s cancer cells (called lysates). The lysate trains the immune system to recognize its target (the tumor), and the adjuvant boosts the body’s immune response to destroy that target. Physicians mix the lysate and adjuvant together in a cellular culture and then inject the mixture into the patient.

Because the therapy is a structurally ill-defined mixture, Mirkin calls this the “blender approach.” The lysate and adjuvant aren’t packaged together, so it’s difficult to ensure that they will hit the same target.

“Statistically, you will get some cells to take up both the lysate and the adjuvant,” said Cassandra Callmann, a postdoctoral fellow in Mirkin’s lab and the paper’s first author. “But you also will get some cells that only receive one or the other. To maximize the immunotherapy’s potency, you need to co-deliver both to the same target cells and in the most effective form or structure possible.”

To overcome this challenge, Mirkin’s team packaged the lysate and adjuvant together inside the core of an SNA. In the study, they injected the SNA underneath the skin of mice with triple-negative breast cancer. The SNAs traveled to the lymph nodes of the mice, entered the cells and released their cargo. This caused an immune response within the cells to combat the lysate.

After treating nine mice with triple-negative breast cancer, six experienced complete tumor remission for 100 days without obvious side effects. Although the other three mice never reached remission, the new treatment did suppress their tumor growth, and the mice still lived longer than the control group.

“It’s definitely prolonging survival,” Callmann noted. “Even if not all mice were completely cured.”

Mirkin and his team also found that the SNA-based immunotherapy protected the mice from relapsing. After the mice entered remission, the team attempted to reimplant the mice with cancer, but tumors did not grow.

When Mirkin’s team removed and examined the tumors from therapy-treated mice, the researchers found an increased number of cytotoxic T-cells — a type of immune cell that attacks disease — and a decreased number of immunosuppressant cells, which prevent the immune system from responding to fight disease.

“If the immunotherapy is protecting the mice from cancer reoccurring, then we may be able to use this is in a preventive context,” Mirkin said. “Our study suggests that the therapy is providing an ‘immune memory.’ That’s something we’re looking into right now.”

Interestingly, a stronger immune response occurred when the researchers incorporated oxidized tumor cells into the SNAs. When making the lysate, the researchers treated the tumor cells with hypochlorous acid, which oxidizes — and kills — the cells. Other researchers have noted in previous clinical studies that oxidized cells create more potent immunotherapies.

“We have confirmed that’s true,” Callmann said. “And we showed that the immune system gives an even better response if the oxidized lysate is also packaged in an SNA.”

Mirkin’s team first tested the new therapy on triple-negative breast cancer tumors because the cancer is one of the most difficult to treat. According to the Triple Negative Breast Cancer Foundation, this disease accounts for 15%-20% of all breast cancers. The cancer tests negative for three proteins (hence the name “triple negative”) produced in large amounts by other types of breast cancer. It resists commonly used breast cancer drugs that target those three proteins.

“It’s one of the most deadly and aggressive forms of breast cancer,” Callmann said. “There are many different types of mutations, and some of the cells mutate very quickly. There is an immediate need for new treatments that work.”

The researchers believe that, in theory, SNA-based immunotherapies should be an effective treatment for many types of cancer. Mirkin’s team plans to explore that next. Mirkin notes that he feels encouraged that four SNA drugs are already in human clinical trials, including a variant of the SNA used in this study in a type of immunotherapy for Merkel Cell carcinoma. That structure also was invented at Northwestern and is in a Phase 2 clinical trial conducted by Exicure, a clinical stage biotechnology startup.

The study, “Tumor cell lysate-loaded immunostimulatory spherical nucleic acids as therapeutics for triple negative breast cancer,” was supported by the National Cancer Institute of the National Institutes of Health (award numbers U54CA199091 and R01CA208783), the Prostate Cancer Foundation, the Movember Foundation (award number 17CHAL08), the Lefkofsky Family Foundation and the Office of Naval Research (award number N00014-15-1-0043). Callmann acknowledges support by the Eden and Steven Romick Postdoctoral fellowship through the American Committee for the Weizmann Institute of Science.