Born in southern China, he was six years old when he and his family immigrated to Chicago.  None of them spoke any English, but his parents opened a Chinese restaurant, where Warren’s father was the primary chef and his mother handled the food orders and money. Warren and his brothers started school and worked in the restaurant alongside their parents. 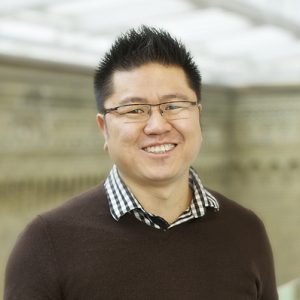 “I am very honored to receive the Kabiller Young Investigator Award in Nanoscience and Nanomedicine, and I hope this recognition helps to inspire other young people in the field of nanotechnology.”

Warren got interested in science when he was young, after tagging along with his older brother to science fairs and finding out that it was a lot more fun than sitting in class. He also developed a keen interest in how the human body heals itself. He was accepted to the University of Illinois, Champaign-Urbana and worked his way through school doing all kinds of jobs, including working in his advisor’s laboratory over the summers.

After receiving his BS in chemistry, he went on to receive his PhD at the Indiana University in Bloomington. There he was lucky enough to work with Dr. Shuming Nie and he remembers that during informal discussions over coffee with his advisor, that his imagination was truly sparked. “It was in these settings where I began to dream of big picture possibilities of nanotechnology applied to medicine,” he stated. After completing his PhD, Warren worked with Dr. Sangeeta Bhatia at the University of California, San Diego for two years as a postdoc, before joining the faculty at the University of Toronto, Ontario.

Warren was named the 2015 winner of the Kabiller Young Investigator Award in Nanoscience and Nanomedicine for his pioneering work in the field of nano-bio interactions, where the focus is on developing a fundamental understanding of how nanoparticle design influences tumor delivery. He is one of the first researchers to discover the effect of size, shape, and surface chemistry on cellular interactions both outside and within the body. He and his research group have developed an infectious disease diagnostic device for point of care use that can differentiate symptoms and can be done anywhere in the world. The diagnoses occurs when a patient pricks his/her fingers, the sample is amplified, and diseases are detected using a Smartphone App. Results for patients infected with HIV and Hepatitis B are available in less than 1 hour at 90% accuracy and the device costs < $100. This device could change the way one diagnoses and tracks diseases globally.

Today, Warren lives in Canada with his wife, Gabriella Chan, his 5 year old son Aiden and his 2 year old daughter Sophie. He is a full professor at the Institute of Biomaterials and Biomedical Engineering and Terrence Donnelly Centre for Cellular and Biomolecular Research at the University of Toronto.