Meet Christina Hemmingsen, a graduate student in the Kalow and Weiss Labs

Christina Hemmingsen is a graduate student in the Kalow Lab, which engages in research at the interface of organic synthesis, polymer chemistry, and materials science; and the Weiss Lab, which studies the interaction of light with nanostructures for applications in catalysis, electronics, and biological sensing. 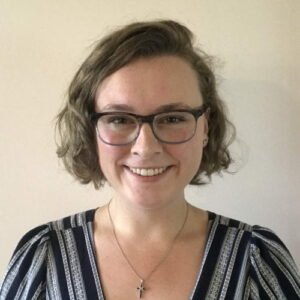 Where are you originally from?

Where did you complete your undergraduate degree?

I completed my undergraduate degree in Chemistry at Case Western Reserve University in Cleveland.

I grew up in a home with two chemists as parents, so I’ve always been surrounded by and encouraged to engage with science. Throughout grade school, I continued to have an affinity for STEM fields and became interested in pursuing academic research after a summer research experience my final year of high school. I had originally applied to the Macromolecular Science and Engineering department (the science of plastics) at CWRU but came back to pure chemistry after realizing I prefer the molecular perspective of a chemist to the big picture vision of an engineer.

How do you explain what you study to non-scientists?

I work with photoresponsive materials, or materials that exhibit special behaviors when you shine light on them. While there are many types of light-responsive systems, I deal specifically with quantum dots (QDs) and photoswitchable molecules.

QDs, which have applications in devices such as displays (think QLED computer monitors) or light sensors, are nanomaterials with well-known light emission properties. For example, by changing the size of the dot, I can tune the color of light they give off. Photoswitches are molecules that undergo a structural or conformational change when irradiated with light.

I am working to elucidate the physical properties, such as the rate of molecular switching, when photoswitches are attached the QD’s surface using various spectroscopic (light measuring) techniques.

You’ve said that you’re interested in blending nanoscience with photochemistry to guide synthesis and manipulate dynamic materials. What inspired you to focus on that, and what do you hope to achieve?

My research throughout undergrad, though nano-focused, was highly interdisciplinary. Going into graduate school, I knew I wanted to continue working with nanomaterials, but I was generally open to trying out new fields and applications of nano research.

My general interest in polymers (aka plastics) led me to the Kalow group, whose specialty is controlling polymeric systems with light. They had an ongoing project with the Weiss group, which primarily studies molecular / nanomaterial photophysics, that involved the work I described above. It seemed like an excellent opportunity to dive into a new and interesting field that combined my passion for nanomaterials and polymers, while allowing me to explore new areas of research like spectroscopy and molecular synthesis.

Our ultimate goal is to deepen the understanding of these composite nanomaterial / photoswitch systems to facilitate their application in electronic devices.

What has been a highlight of your time at Northwestern?

Research is a fickle line of work. Most of the time, things don’t happen the way you think they will, and you have to go back to the drawing board. So when things go right, it’s always a high point.

Recently, I finished analyzing some data for the photoswitch I’ve been studying and was pleased by how well the data was supported by work previously reported in the field. It was exciting to pull together all the new skills I had learned, from molecular synthesis to data collection and analysis, and feel confident in the results.

What has been the most challenging aspect of your work or your time at Northwestern?

Starting graduate school in the middle of a pandemic certainly made the transition from undergrad a challenge. I was originally going to participate in summer research before the Fall 2020 quarter began, but the timeline for when first year students could participate in research activities, or even go to campus, kept getting pushed back. Despite occasional outdoor get-togethers and “seeing” people over Zoom, it was difficult make connections with other students in my cohort and eventually in my labs (which I also had to choose without physically meeting anyone or seeing any lab spaces).

It has been a long ride from work-from-home and shift schedules in lab, but I think we are almost back to a (somewhat) normal work environment.

Can you tell me about your experiences either being mentored or mentoring others?

Because I’m just finishing up my first year of graduate school, I haven’t had the chance to guide younger students in lab yet. (Though I am excited to in the future!) On the other hand, my peer-mentors in both the Kalow and Weiss labs have been extremely supportive and flexible in helping me get started.

Labs were still running in shifts at limited capacity when I began working. I had both a “shift” mentor that guided me through in-person lab techniques and a “primary” mentor (who worked the other shift) that was my contact for project specific details. While I’ve worked with nanomaterials before, I am relatively new to the field of photoresponsive systems and needed a good amount of help at the start.

I am very appreciative of my mentors’ guidance in everything from synthesis to data analysis to general tips on how to get the most out of graduate school. I’m especially thankful for the support I received from Christopher Eckdahl (Kalow), Suyog Padgaonkar (Weiss), Rafael López-Arteaga (Weiss), and Emily McClure (Kalow).

What are your hobbies outside of the lab?

In my free time I enjoy cooking (but especially eating), playing violin, spending time outside, and learning languages. I studied Spanish through undergrad and more recently began leaning Japanese during quarantine.