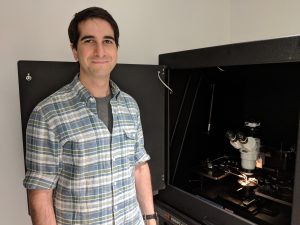 Where did you complete your undergraduate and graduate degrees?
I’m Israeli, born and raised, and I got my undergrad at Tel Aviv University and I went to graduate school at the Weizmann Institute of Science.

Is the Weizmann Institute in Israel as well?
Yes, it’s actually in my home town of Rehovot, so I grew up right next to it, and we went there on school trips to “see science being done.” It was a lot of fun, actually, being able to be a student there.

Did growing up next to the Institute contribute to your interest in science?
To some degree, yeah. I was always interested in science, but I had a high school chemistry teacher who was just amazing. I could have gone for computer science or physics or for engineering, but she was just so enthusiastic about chemistry that I think that kind of infected me. She was really good as a teacher as well, but it was her enthusiasm for the subject that got me.

And then how did you develop a more focused interest in nanotechnology?
In undergrad, you don’t really learn specifically about nanotechnology. But when I started graduate school at the Weizmann, they had something really nice: you do three rotations at a different lab (each one is about three months) and only after that do you choose your permanent lab. So I got to experience three very different labs. And one of the labs was in nanotechnology; it was in plasmonics, which is using gold nanoparticles for sensing things, because they change their color based on what’s absorbed on them. And from that experience, I was like, OK, this is the most interesting thing. We were also building monolayers and multilayers, and really just engineering a structure on the nanoscale, and I thought that was really cool. So that’s been my approach from that point to now.

So now I’m applying for faculty positions, and my approach is always, let’s try to build an interesting system on the nanoscale and see what it does. And it’s usually interesting, because if you build a system that no one has built before, clearly it’s going to do things no one has seen before. So that’s a really cool way of learning about physical laws of nature and also doing useful things, and I appreciate that.

How do you explain what you study to friends or family members that don’t know anything about nanotechnology?
That is always a challenge, especially with my topic. When I give lectures or seminars, usually no one in the audience has even heard about the general name of my research, which is “ratchets.” A ratchet is a general word for any mechanism that takes non-directional motion and makes it directional, or rectifies it. So we have ratcheting screwdrivers, for instance, which you can rotate in both directions, but then the screw only goes in one way, because we have an asymmetric gear wheel there. Anyway, what I say is, there’s this nice way for nature to move, to use asymmetry in proteins and things like that. And at my research center, the Center for Bio-inspired Energy Research (CBES), we try to look at biological mechanisms, be inspired by them, and apply them for useful, energy-related things. So I’m trying to build that for electrons. I’m trying to see how I can move electrons in a different way that people haven’t done before, that’s very different from normal electronic devices, and I hope that can be useful for making energy devices.

Can you tell me about some potential future applications for your work?
This is a biological mechanism, and one of the things that’s amazing in cells is that if you look at a cellular environment from the perspective of one of the motor proteins, it’s incredibly noisy–there are things just jostling around everywhere hitting you all the time. And it’s also very highly damped, so if you try to move somewhere, it’s like trying to—there’s a great paper title by someone introducing the field, and the title is “How to Swim in Molasses and Walk in a Hurricane”—it’s super noisy, super hard to get around. The chemical energy that these proteins have available to them is actually much weaker than the noise around them, but they can still use it effectively. So we’re interested in trying to use this ratchet mechanism to utilize a different source of weak levels of energy, and specifically we’re interested in solar power.

We have a design that one of my colleagues, Bryan Lau, who was a joint grad student between Emily and Mark Ratner, produced. He did some really great simulations on a system like this that uses a semiconductor that’s strained, and so on—deep theory details, but the point is, his simulations show that a design like this that uses a ratchet principle, local asymmetry, can harness photons of any energy, so that we don’t have to be limited to these very specific quantas that cause us to lose something like 70% of the energy in the solar spectrum. We could actually use much more of it.

Where do you hope to take your career in the next 5 or 10 years?
I’m applying for faculty positions right now—I just applied to a couple today.

Can you tell me about your experience being mentored in nanotechnology?
I’ve been really lucky in having good mentors. My grad school advisor was a very good mentor but he was pretty hands off. You could always ask him for help and he would spend all the time you need, but if things were going right and I didn’t really need anything, I could work for a month or two without even talking to him about science too much. But he cared very much and he gave all the explanations needed, and one of his main points of interest was accuracy. If you made a claim, he would scrutinize it extremely closely—do we actually know this? How do we know this? Are we making the right claim? Things like that.

And in a very different style, Emily (Professor Emily Weiss) is involved in everything in the group, which is really quite amazing because there are 19 of us. She’s still very, very involved in every single project and has a very good idea for the heartbeat of the project—what’s happening, and where we need to go.